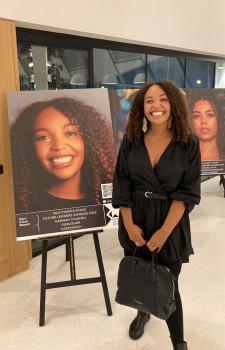 Hannah Chukwu (English, 2015) has been featured in an exhibition of 40 future leaders organised by Black Cultural Archives (BCA) and Black Britain Beyond at University College London.

Over the past 40 years, the mission of the BCA has been to collect, preserve and celebrate the histories of people of African and Caribbean descent in the UK. To celebrate their 40th anniversary, the organisation has curated the inaugural BCA Chair's Award and portrait exhibition, featuring 40 young leaders who exemplify the mission and values of the BCA. The portraits have featured in the '40 X 40:BCA Chair’s Award Future Leaders Campaign' exhibition in Brixton this month and have been part of the Mayor of London's Black History Month celebrations. Last week, the 40 leaders were honoured at a prize-giving ceremony.

"I really feel so honoured to have been chosen alongside some of the most brilliant pioneers in the country," said Hannah after attending the ceremony on Thursday. "The love in the room was amazing, and I felt so inspired by everyone’s stories as we celebrated together. I’m so grateful to the BCA for bringing us together as a community."

Hannah Chukwu studied English at Worcester and was the first person of colour to be elected as JCR President. She is an editor at Penguin Random House UK and the series editor for Black Britain: Writing Back with Booker Prize-winning author Bernardine Evaristo. She has also contributed as Policy and Campaigns Consultant for 'Lit in Colour', a campaign run by PRH and the Runnymede Trust which aims to diversify the English GCSE curriculum. She is a Trustee at The Brilliant Club and a Board Member of Creative UK. In 2021 she won the LBF Trailblazer Award, the Rising Star Award at the British Business Awards and was named as an EMpower Ethnic Minority Future Leader. In 2022, she won the Print Charity Rising Star Award and has been nominated for a Black Talent Award.

In January 2023, Hannah will take up a new role as Literary Editorial Director at Dialogue Books, Hachette UK's newest division. Dialogue Books shines a spotlight on stories for, about and by readers from the LGBTQI+, disability, working class and BAME communities.