This morning, the University of Oxford released their Annual Admissions Statistical Report. The report in full can be found here. The below is a response to this report from the College's Tutor for Admissions and Tinsley Outreach Fellow. 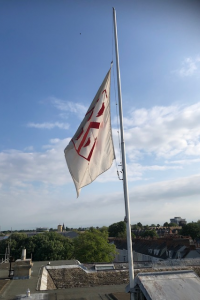 The College Flag flies at half-mast today in honour of Rob Dennis, Head Chef 1995-2019, who died at home on the weekend, surrounded by his family. Our thoughts are with them.

Rob joined Worcester as Sous-Chef in 1993 and was promoted to Head Chef in 1995. He played a major role in the refurbishment of the College kitchen, his pride and joy. He retired on grounds of ill health early last year.

Professor Heather Viles has been awarded the Royal Geographical Society's prestigious Founder's Medal for her excellence in establishing the field of biogeomorphology.

Message from the Interim Provost

I write now with two pieces of news that are wholly unrelated to the virus.

The first is that, after 26 years, Coleen Day will be retiring at the end of September. You all know far better than I do what an absolutely extraordinary job she has done in that time, and I am delighted to say that she will remain a member of College: Governing Body has elected her to an Emeritus Fellowship. I look forward to a moment when we can thank her and celebrate her fabulous achievements in the style they deserve.

On behalf of College and the Governing Body in these times of distress and worry, I send my very warmest wishes to the Worcester community – to our students, staff, Fellows, alumni and donors; to the school and sixth-form students involved in our outreach activities, and to our offer-holders for next academic year; to our local neighbours, and to our friends, near and far. I hope that you and your loved ones are well, and that if any of you are ill, you make a full and swift recovery.

Researchers from the University of Oxford have received a generous philanthropic gift from Honorary Fellow and Old Member Ben Delo (2002) to conduct a UK cross-sectional survey study to determine the level of community-based infection of COVID-19.

The current global COVID-19 pandemic is rapidly increasing in scale and there is an urgent need to determine the background rate of infection in the UK to inform the public health response.

Current student, and former RAF helicopter and weapons engineer, Chantal Edwardes (2019, Graduate Entry Medicine) is the Project Manager at OxVent, a multidisciplinary team of engineers and medics at the University of Oxford and King’s College London, working to develop a rapidly deployable ventilator for COVID-19 patients.

OxVent is working in an open-source environment from pre-existing technology. This approach facilitates a model that integrates into our current NHS systems and components as efficiently as possible so that more patients can be treated faster.

Two students have put together a Minecraft server that re-constructs the college site in the finest of detail, observing the sweeping lawns of the main quad alongside the atmospheric low ceilings of the college bar.

The virtual college, built entirely in Minecraft blocks, has seen multiple online users, attracting a large number as soon as it was announced on the Worcester JCR Facebook page.

Jordan Grinyer, one of the students who created the server, told The Oxford Student: “We made it and announced it straight away, and in the first hour had about 15 people log on.

Vaccine development is one of Oxford’s biggest strengths and Oxford is currently developing a single-dose vaccine candidate at the University’s Jenner Institute. We are using a non-replicating viral vector platform and believe it may be the world’s most promising and advanced candidate.