Peter Frankopan will be in conversation with the Provost, Sir Jonathan Bate, in New York on 10 April at an alumni event generously hosted by David Loevner (1976).

Worcester College is home to many of the events announced for the 2019 FT Weekend Oxford Literary festival, which will be taking place from 30 March to 7 April. Tickets are available from https://oxfordliteraryfestival.org/about/tickets

Following the announcement of the extraordinary success of the Tercentenary Campaign reaching its target of £100 million, the Provost, Sir Jonathan Bate, has announced that he will step down in September 2019 to focus on his academic work. The College's Governing Body has appointed Dr Kate Tunstall, who had been due to take on the role of Vice-Provost in October, to serve as Interim Provost. Dr Peter Darrah has agreed to extend his term of office as Vice-Provost, and the College has asked a small group of Senior Fellows to start the process that will appoint a new Provost in due course.

Back in 2010, I was honoured to be elected by Governing Body into the office of Provost of Worcester College. As many alumni have said to me, to have stewardship of our beautiful College is perhaps the best job in the world. But it has also proved to be a demanding job for both me and my family, with many evening and weekend engagements, travel across the world in pursuit of benefactions, and the 24/7 sense of responsibility that comes from residence in the Provost’s Lodgings. 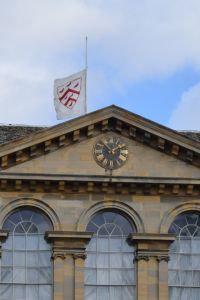 It is with deepest sadness we report that Dan Lunn passed away peacefully on Sunday 17th February after a short illness.  Our thoughts will be with his wife Mary and their family in the days to come.

We are offering a fantastic new opportunity for writers. Candidates are being invited to apply for the David Bradshaw Creative Writing Residency, a collaboration between Worcester College, the Bodleian Libraries, Oxford, and the Complete Works of Evelyn Waugh project (based at the University of Leicester).

Worcester’s Access and Admissions Officer, Charli Hopkins, visited Beckfoot School in Bradford on 24 January. She went into the classroom to encourage students to consider applying to Oxford, and to promote broad and curious thinking. Around 50 students, currently in Year 12 and from four different schools, took part in the workshop. She took them through a range of interesting academic material and challenging questions by using Oxplore, the University’s first digital outreach portal.

Read more
Sultan Abdullah of Pahang (1979) elected as new Malaysian king
24th January 2019
Malaysia has elected Sultan Abdullah of Pahang as its new king after the abdication of the previous monarch. Sultan Abdullah studied at Worcester in 1979. According to news reports, he is expected to be sworn into his new role on 31 January. See: www.bloomberg.com/news/articles/2019-01-24/malaysia-chooses-new-king-after-previous-monarch-steps-down
Read more