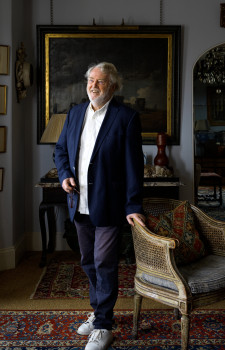 Robert was a celebrated interior decorator who launched his career from Worcester’s staircase 7 as an undergraduate antiques dealer in the 1960s. After his mother and stepfather separated during his first term at Oxford, Robert was left without the money required to continue his studies. With two terms off granted by his tutor James Campbell, he set about scouring Oxfordshire’s junk shops, buying and selling antiques in a move which would kick-start an illustrious career spanning half a century. During this time, he sold the college a bust of the Whig parliamentarian Charles James Fox (which remains in our collection today) and successfully petitioned to keep the same rooms throughout his degree “so that my clients may know where to find me.”

As a decorator, Robert embraced informal and richly layered interiors anchored around his love of textiles and historic objects – the Architectural Digest described his style to be “as welcoming and as unassuming as the man himself.” Robert’s own fabric designs, often inspired by European, north African and Middle Eastern textiles, first went into production in 1983 and continue to be produced by his studio alongside a line of wallpapers, lighting and furniture. 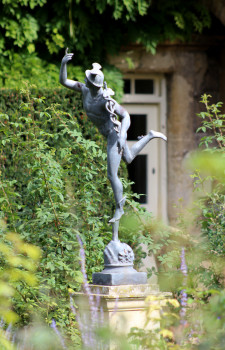 Among his many clients, Robert worked particularly closely with the Prince of Wales on six houses, including schemes for Clarence House, Highgrove and St James’s Palace. This work was recognised when he was named a Lieutenant of the Royal Victorian Order in the 2004 New Year Honours list. “You often hear of people who are said to have a good eye,” Prince Charles wrote in 2015, “but Robert Kime must surely be one of the best”.

Robert was a great friend to Worcester, advising on interior schemes for the college over a number of years, including the SCR and, most recently, the Provost’s Lodgings. He was a generous supporter of the College Appeal in the 1980s and, in 2007, donated the statue of Mercury which stands in the Provost’s rose garden in commemoration of Sir John Masterman (Provost 1946-61).

His wife, the celebrated children’s author and producer Helen Nicoll, died in 2012 and Robert is survived by his children Tom and Hannah to whom we extend our deepest sympathy.

Obituaries may be read in The Times and The New York Times.

Images: Robert Kime photographed in his London flat by Simon Brown, 2021; Statue of Mercury donated by Robert Kime in the Provost's rose garden.