College members who died in 1941 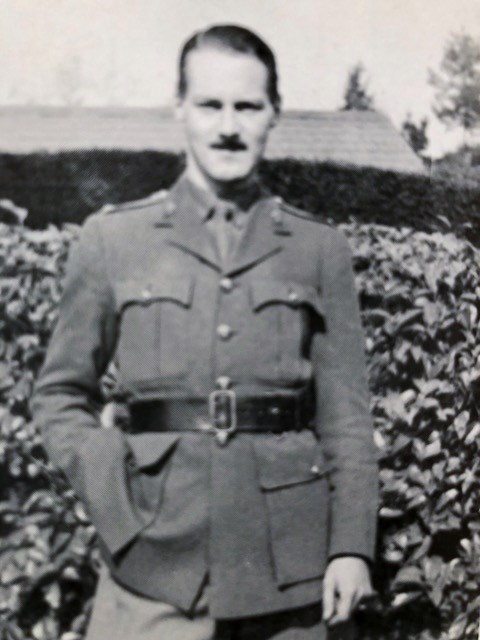 Patrick Hubert Charles Burke, known as Pat, was born in London on 2 June 1918, the only son of Colonel Hubert Burke DSO and Edith (née Denton). He was educated at Wellington College from 1932 and 1935. He entered Worcester College, Oxford on 9 October 1936 and achieved 3rd class honours in Modern History in 1939.

Pat Burke is buried at Keren War Cemetery. He is commemorated on the war memorials at Wellington College, and at Worcester College, Oxford.

David Maitland-Makgill-Crichton entered Worcester College on 6 October 1933 on an open exhibition. He achieved 3rd class honours in Modern History in 1936. During his time at the University he was editor of the student magazine Isis, and spoke at the Oxford Union. After leaving Oxford he became a freelance journalist and spent a year in Albania where he became friendly with King Zog I, about whom he was writing a biography. He also travelled in north Greece and Turkey.

Following the outbreak of war, David Maitland-Makgill-Crichton was commissioned as a 2nd Lieutenant in the Royal Northumberland Fusiliers on 11 February 1940, but in 1941 he was recruited by the Special Operations Executive because of his experiences in Albania, Greece and Turkey. He left Liverpool on the cargo ship, SS Jonathan Holt, on 18 February 1941 but was killed when the ship was sunk by U Boat U-97 on 24 February 1941. Lieutenant David Maitland-Makgill-Crichton was 33 years old.

David Maitland-Makgill-Crichton is commemorated on the Brookwood Memorial, and on the war memorial of Worcester College, Oxford. 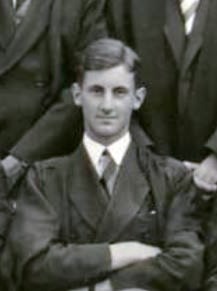 Martin Charles William Dumaresq was born in Hampshire on 10 June 1915, the son of Rear Admiral John Saumarez Dumaresq CB MVO RN, and Christian Elizabeth Louisa (née Dalrymple). He was educated at Radley College from 1929 to 1934, where he was a member of the Hockey XI and President of the Musical Society as well as a School Prefect.

Martin Dumaresq entered Worcester College on 12 October 1934, and achieved 4th class honours in Literae Humaniores (Classics) in 1938. He was commissioned as a 2nd Lieutenant as a University Candidate on the General List for the Territorial Army on 2 August 1938. He transferred as a 2nd Lieutenant in the Royal Artillery on 21 September 1938.

In 1941 Captain Martin Dumaresq was stationed in Greece, and was killed defending the bridge over the Corinth Canal when it was attacked by German parachutists on 26 April 1941. He was 26 years old.

Martin Dumaresq is buried at Phaleron War Cemetery, and is commemorated on the war memorials at Radley College, and at Worcester College, Oxford.

James Ernest Cox was born at Croydon on 29 April 1908, the second son of Minnie (née Mason) and Samuel Cox, a draper’s buyer. He attended Whitgift Grammar School in Croydon from 1917 to 1926 and entered Worcester College on 12 October 1928. While at Worcester, James Cox played hockey and rugby for the College. His BA was conferred on the 6 June 1931, and some time after graduation he was ordained.

James Cox was commissioned as a Squadron Leader in the Chaplains Department of the Royal Air Force Volunteer Reserve on 11 September 1939. On the morning of 28 April 1941 he was a passenger on an aircraft travelling from Bir El Gubbi to Fuka in northern Egypt. The aircraft was attacked by five Messerschmitts and shot down by the fighter ace Hans Joachim Marseille with the loss of all the passengers and crew, including the Reverend Chaplain Squadron Leader James Cox, aged 32.

James Cox is commemorated on the Alamein Memorial, and the war memorials at Sandown, Whitgift School and at Worcester College, Oxford.

Archibald Graham Weir was born in Enfield, Middlesex on 11 July 1885, the son of Anna (née Ritter) and Archibald Weir, a barrister at law. He was educated at Marlborough College from 1899 to 1902 and entered Worcester College, Oxford on 16 October 1903 where he achieved 2nd class honours in French in 1907.

Archibald Weir was commissioned as a 2nd Lieutenant on the Unattached List for the Auxiliary Forces on 1 August 1907 and was attached to the 1st Battalion Duke of Cornwall’s Light Infantry on 9 October 1907. On 8 October 1910 Archibald Weir married Mary Bartlett; they had two daughters, Ellinor and Diana, and two sons, Adrian and Archibald.

Following the outbreak of the First World War, Archibald Weir landed in France in June 1915 where he joined No 4 Squadron, Royal Flying Corps, based at Doullens. On 26 July 1915 he was forced to land behind enemy lines while on a reconnaissance flight and was taken prisoner. He was repatriated to England on 17 November 1918.

Archibald Weir is buried at Kilcommon Erris Church of Ireland Churchyard in County Mayo, Ireland. He is commemorated on the war memorials at Marlborough College and Worcester College, Oxford.

School information courtesy of Marlborough College Archives; further information from: TNA - Officer File 1914-19, WO 339/7111; Cox & Co, List of British Officers Taken Prisoner in the Various Theatres of War Between August 1914 and November 1918, (1919); Trevor Henshaw, The Sky Their Battlefield, (1995); and uboat.net. 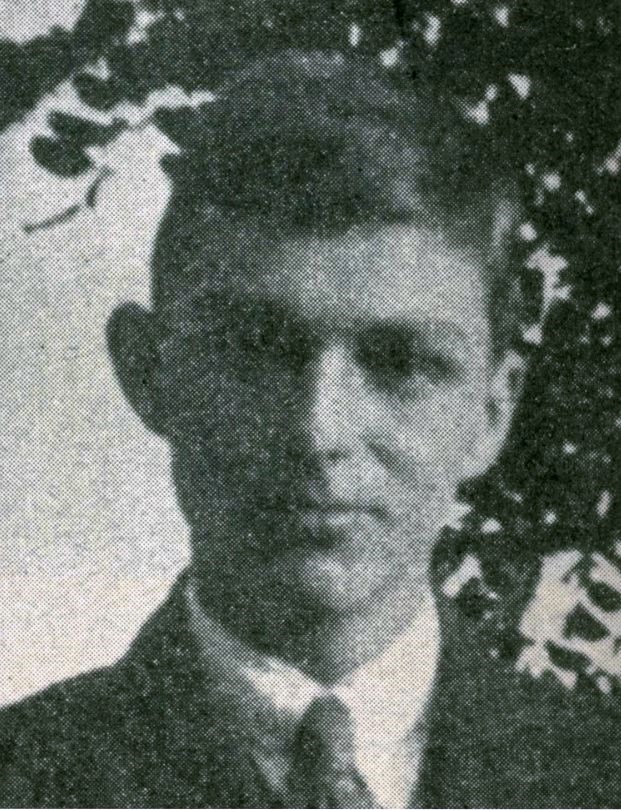 Richard Arthur Fanshawe was born at Salcombe in Devon on 18 February 1906, the son of Captain Arthur Fanshawe RN and Agnes (née Hustler-Tuck). He was educated at Brighton College, where he was in Hampden House from 1920 to 1924. He entered Worcester College, Oxford on 10 October 1925 as an exhibitioner, and achieved 2nd class honours in Modern History in 1929.

During the Second World War, Richard Fanshawe was an ARP (air raid precautions) warden in London. On the night of 10/11 May 1941, the Luftwaffe despatched 505 bombers in the largest attack on London of the entire war. Some 700 acres of the city were damaged or destroyed, 1,436 people were killed and more than 2,000 were injured. At around 12.30am on 11 May a bomb landed on the basement of 22 Elvaston Place, Kensington, and Richard Fanshawe was among the team who responded. The bomb was subsequently ignited by fire, killing nineteen people, including Warden Richard Fanshawe. He was 35 years old.

Richard Fanshawe is commemorated on the war memorials at Brighton College, and at Worcester College, Oxford.

Francis Herbert Schumer was born in Middlesex on 13 April 1919, the youngest son of Dr Jacob Schumer MD and Matilda (née Myers). He was educated at Giggleswick School where he was in the Rugby 1st XV and was head of the School Officer Training Corps.

Francis Schumer entered Worcester College on 7 October 1938 but did not return to the College for his second year as he joined the Royal Air Force Volunteer Reserve in June 1939 and was called up on 1 September 1939. While at the College he played a guitar, which was returned to his mother after his death.

Francis Schumer was commissioned as a Pilot Officer on probation on 7 September 1940. On the same day he arrived at No. 5 Operational Training Unit based at RAF Aston Down in Gloucestershire to complete his training. He was involved in accidents on 12 September 1940 and 24 February 1941. He was posted to 600 Squadron on 24 September 1940.

On 12 July 1941 Francis Schumer took off from RAF Preddanack in Cornwall with his Observer, Allan Ralph Smither, for a night flying test in a Beaufighter aircraft . While flying between 8,000 and 9,000 feet Francis Schumer attempted to carry out a loop. It is thought that he pulled out too sharply from the recovery dive and went into a spin. Rather than bale out, he either tried to right the aircraft or wanted to help his Observer, but the aircraft span into the ground and both men were killed. Pilot Officer Francis Schumer was killed on active service aged 22.

Francis Schumer is commemorated at Golders Green Crematorium, and on the war memorials at Giggleswick School and Worcester College, Oxford.

John Michael Hugill was born in Surrey on 6 November 1917, the son of Gwendoline (née Thomas) and Harold Hugill, a chartered accountant. He was educated at Stowe School where he passed his Higher Certificate in June 1933.

John Hugill entered Worcester College on 8 October 1937 but was unable to return for the start of his third year in October 1939 as he was working as an attaché for the British Legation in Copenhagen, Denmark. He was commissioned as a 2nd Lieutenant in the Intelligence Corps on 14 September 1940. Lieutenant John Hugill was killed in an accident while on active service on 30 July 1941, aged 23.

John Hugill was buried at All Saints Church, Sanderstead, Croydon. He is commemorated on the war memorials at Stowe School and at Worcester College, Oxford. 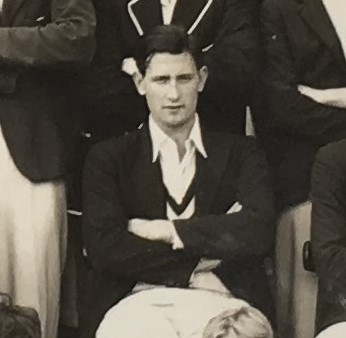 Cullen Eric Powell was born on 13 March 1920, the only child of Sheila (née O’Grady) and Harold Powell of India. Following the death of his father in Australia in 1925, Cullen Powell and his mother returned to England from Calcutta in June 1926. She married Edwin Valentine Manners-Smith in 1931.

Cullen Powell was educated at Charterhouse School where he was a member of the Cricket 2nd XI and won his colours in athletics for pole vaulting. He entered Worcester College, Oxford on 13 October 1939 but left in 1940 to join the Royal Air Force Volunteer Reserve. He rose to the rank of Sergeant and was posted to 107 Squadron.

On 1 August 1941 Cullen Powell and his crew took off with two other aircraft from RAF Great Massingham in Norfolk in a Blenheim aircraft for an anti-shipping operation in the Nieuport and Ostend area of the Belgian coast. They successfully bombed two enemy ships, but during the attack Cullen Powell’s aircraft was shot down and crashed in the Scheldt Estuary. Sergeant Cullen Powell was killed in the crash, aged 22.

Cullen Powell is commemorated on the Runnymede Memorial, and on the war memorials at Charterhouse School and Worcester College, Oxford.

Rupert Henry Grattan-Doyle was born at Hexham in Northumberland on 2 December 1910, the second son of Gwendoline (née Mackusick) and Sir Nicholas Grattan-Doyle, later Conservative MP for Newcastle upon Tyne North. He was educated at Ampleforth College.

Rupert Grattan-Doyle entered Worcester College on 10 October 1930 but left Oxford in October 1931 without taking a degree.  He went to work as a travelling salesman for an engineering manufacturer. He obtained his flying licence on 13 March 1939 and became a member of the Civil Air Guard at Hatfield before joining the Royal Air Force Volunteer Reserve where he was posted as a pilot to No. 9 Air Observers Navigation School.

Sergeant Rupert Grattan-Doyle was killed along with his crew when his Avro Anson aircraft crashed into the sea off Morf Nefyn in Caernarvonshire during a training exercise on 21 August 1941.

Rupert Grattan-Doyle is buried in Pwllheli Borough Cemetery in Wales. He is commemorated on the war memorial at Worcester College, Oxford.

Martin John Hay was born in London on 3 June 1919, the son of Lieutenant Colonel Sir Bache McEvers Athole Hay, 11th Baronet Hay of Smithfield, and Judith (née Poole). He was educated at Eton College until 1937, and entered Worcester College on 7 October 1938 but left before taking a degree to enlist in the army.

Martin Hay attended the 110th Officer Cadet Training Unit (Cavalry) before being commissioned as a 2nd Lieutenant in the Life Guards on 27 July 1940. He served as a signals officer. 2nd Lieutenant Martin Hay died on active duty on 9 October 1941, aged 22.

William Allen Brown was born at Ashton in Lancashire on 20 February 1920, the son of Evelyn (née Allen) and William Brown, a hat manufacturer. He was educated at Sedbergh School from 1934 to 1939. He entered Worcester College on 13 October 1939, with a scholarship in Classics and achieved 2nd class honours in Classical Moderations (first year exams) in 1940.

William Brown did not return to Oxford in the autumn of 1940. He attended an Officer Cadet Training Unit before being commissioned as a 2nd Lieutenant in the Royal Signals on the 28 June 1941. 2nd Lieutenant William Brown was killed in an accident at Watling Street, Kensworth, on 15 October 1941, while on active service.

William Brown is buried at Denton Cemetery, and is commemorated on the war memorials at Sedbergh School and Worcester College, Oxford.