Lieutenant Rothes Wilkinson matriculated in 1907 and graduated in 1911.  He came from a family that had associations with Worcester College dating back to the eighteenth century, and was later joined at the College by his two younger brothers, Harry (died 1916) and Cyril (later a fellow of the College, and Dean from 1919 to 1958).  Following his graduation Rothes Wilkinson obtained a commission in the 4th Battalion, Middlesex Regiment in 1911 and was promoted to Lieutenant in 1913.  At the outbreak of war his battalion was quickly mobilised and they left Southampton for the French-Belgian border on 13 August 1914.  They were involved in some of the first skirmishes of the war at Obourg, near Mons, and Rothes Wilkinson was killed in action on 23 August 1914.

Image taken from a photograph of the Worcester College Eight in 1911. 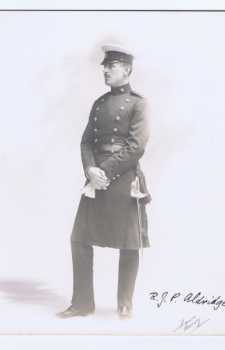 Captain R J P Aldridge matriculated in 1895 and graduated BA in 1898; during his time at Worcester he won prizes for athletics and was a Rugby Blue.  He joined the 2nd Battalion of the Royal Sussex Regiment in May 1900 and served with them in India and Malta.  He went to France with the first British Expeditionary Force on 12 August 1914 and was killed by a shell at the Battle of the Aisne on 7 October.  Captain Aldridge was married in 1908 to Mabel Noble and had two children; Dulcibella, born 1909, and Reginald who was born two months after his death in December 1914.

Photograph chosen for the remembrance volume by his wife, Mabel Aldridge. 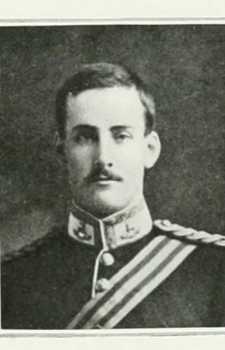 Captain Arthur Bradshaw was educated at Marlborough and Sandhurst and received a commission with 14th Jat Lancers in 1902 with whom he served in India.  He entered Worcester College as a Fellow Commoner in 1907 and devoted each leave from his Indian Service to the successive steps of an undergraduate career, achieving the BA degree in 1912.  In December 1913 he married Florita Price.  On the outbreak of war he applied to be sent to France rather than back to India and joined the 15th The King’s Hussars.  He was killed in action at Bout de Ville on 13 October 1914.

Photograph reproduced from Clutterbuck (ed), The Bond of Sacrifice (1917). 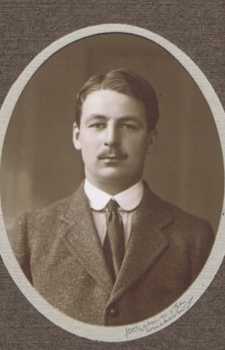 Second Lieutenant George Vacher matriculated in 1913.  He was a keen athlete, excelling at running and boxing, and reached the welterweight finals of the Oxford University trials in 1914.  He was a member of the Oxford University Officers’ Training Corps, through which he applied for a commission on the outbreak of war and was gazetted to his regiment in August 1914.  He left for Flanders on the 5th of October and was killed in action at Zandvoorde on 30 October 1914.

Photograph chosen for the remembrance volume by his father, H P Vacher. 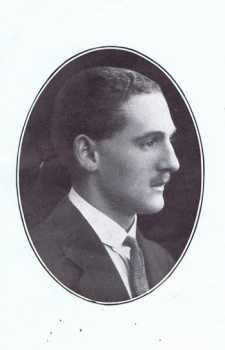 Kenneth Aplin matriculated in 1911 but did not take a degree.  He joined the 3rd (Reserve) Battalion of the Royal Inniskilling Fusiliers on 1 November 1913 and following the outbreak of war left for the front on 13 September 1914.  He was killed in action near Messines, Belgium, on 1 November 1914.

Photograph chosen for the remembrance volume by his father, J. Shorland Aplin.

Léon Machebeuf matriculated in 1902 but did not take a degree.  He joined the 166e Regiment d’Infanterie of the French army in 1908 and was killed at Buzy-Darmont on 12 November 1914.

Unfortunately the College has no photographs of Léon Machebeuf.

The Reverend George Hewetson matriculated in 1895, graduated BA in 1901 and became chaplain to the Royal Navy in 1906, serving on HMS Britannia and HMS Minotaur in the China Sea.  At the time of his death he was chaplain on the HMS Bulwark and was killed on 26 November 1914 in an explosion.

Unfortunately the College has no photographs of George Hewetson.