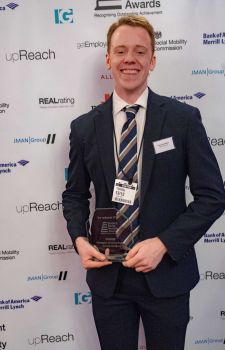 Efforts by Worcester medical student Tom Gardiner to help others access higher education have been recognised at a national awards ceremony. The charity upReach presented him with the Biggest Champion of Social Mobility award at the inaugural Student Social Mobility Awards held at the House of Lords last month.

The Awards aim to showcase the outstanding achievements of students from less advantaged backgrounds, as well as marking the achievements of those who have made a significant contribution towards enabling others to succeed.

Over the last five years, Tom has worked with the University and several charities to improve access opportunities for pupils from disadvantaged backgrounds. Passionate about early intervention, he is also a school governor and trustee of a psychological behaviour charity.  He said: ‘I’m honoured and humbled to have won this award, especially given the incredible work other nominees have done to promote social mobility. If there’s one thing that drives me more than anything else, it’s the belief that everyone should have the same opportunities in life, regardless of background. This should be true both domestically and internationally. Inequality remains a huge problem in the UK.’

In total, 26 awards honoured students, mentors, and university and employer initiatives after an extensive nomination and judging process involving 200 undergraduates from 33 nominated UK universities. The independent judging panel comprised leading representatives from the fields of politics, academia, education and business.

For more information about the Awards.